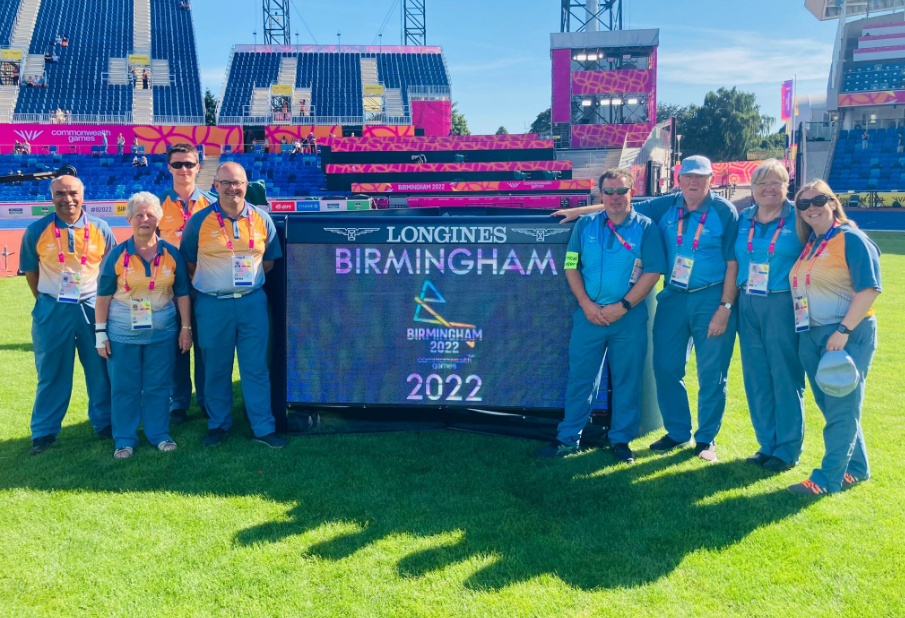 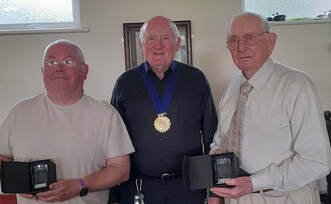 Photographed on the 1st July at our Annual General Meeting the Bohemian Tennis Club, Gosforth
​
NECAA President Mick Frazer, presenting awards to Graham Hall and Michael Moates, an additional award went to Mike Kaiser, but who was not able to attend.
2022 Indoor appointments

2022 Indoor Pentathlon officials team
27.01.22 The North East Counties Athletics Association would like to congratulate the following officials from the North East who have been selected to officiate at the Commonwealth Games in Birmingham;
James Colling Technical Manager, Mick Frazer Clerk of Course, Margaret Frazer Field Judge and Marathon Refreshment Station Judge, Kevin Carr Marathon Drinks Station Chief Plus Alan Bell and Lesley Minervini who are part of the Start Team, And Craig Birch who will be a Field Judge.
Due to England Athletics wanting to stay with online courses, our planned course on March 20th has had to be cancelled. Level 1 Officials courses, for all disciplines will be run online book via UKA hub website

01.12.21 Keith Willshire picks up Unsung Hero award at England Athletics North East Volunteer Awards
​
Always cheerful and enthusiastic, Keith has led the club through its most successful and challenging year yet, calmly finding solutions to a myriad of issues. Providing leadership of the highest quality he has managed a huge number of local track and field meetings, processing entries, solving time tabling issues, and introducing new events such as mixed relays and also Open Pentathlon. Keith has assisted at cross country and road events, and is also a Track Judge. During lockdown he kept everyone in touch with regular Zoom meetings and developed a new computer system which has helped increase levels of participation amongst the club’s athletes. 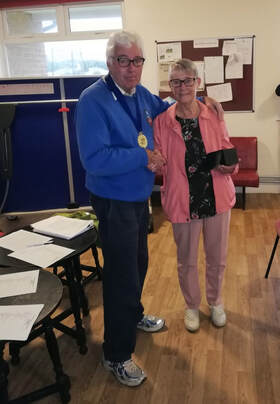 Heather has been a keen member of Richmond and Zetland Athletics Club for many years, where her husband Bill and daughter Fiona competed. She was always on hand to help out and promote the club, lending a hand and eventually started officiating, with the starting up of the kids McDonalds league.

Heather has been a keen official for 30 years, gaining a lot of respect from her fellow officials and athletes. Over the years she has attained Level 3 and officiated at many different leagues and events, from Track and Field to cross country and road. Heather and Bill have become regulars officiating at the British Masters Championships.

Heathers keenness over the years has brought her husband Bill into the officiating family, and in recent years her daughter Fiona and son-in-law law Graham also became officials all 3 to Level 3. Heather has always encouraged new officials and athletes over the years and continues to do so. 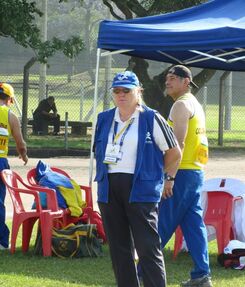 All competitions held under UKA rules, as a matter of fairness and consistency, will apply Rule T5. The appropriate action will be taken – in all probability Disqualification.

UKA are reminding athletes in the first instance it is their responsibility to ensure their shoes conform.

Athletes should cover themselves by:
1 Checking the World Athletics Approved Shoes Table (World Athletics website)
2 Bring a spare pair of competition shoes if in doubt

The Official of the Year Award went to James Colling, while Margaret Frazer was awarded the Runner Up award. The 'virtual presentation' was done by Archie Jenkins and here is what Archie had to say on the night;

MARGARET FRAZER (Runner Up)
Margaret Frazer, like many, progressed from an athlete at her local club South Shields to become a technical official. Margaret, a level 4 field judge is an ever present at local events with a vast experience, enthusiastically advising and mentoring trainee officials and those on their pathway from level 1 to level 3. Her friendly encouragement is accessible to all. Her expertise involves appointments from local and regional to international level. One of her greatest achievements was her selection to officiate at the 2017 World Championships in London. Her services to master`s athletics was honoured when she was invited to become an Honorary Member of NEMAA. This commitment to master`s athletics locally and nationally has been rewarded with regular selection to World Master`s Championships throughout the globe, with the bonus of exciting world-wide travel. I may add Margaret is not shy to enjoying herself socially at the end of the day!
Margaret, also officiates regularly at local and regional endurance events. Administratively she serves on the NECAA General Committee, the Northern Athletics Official`s Association – making sure north east counties officials are not forgotten and she is in her first year as NECAA Track & Field CofSec.

JAMES COLLING (Winner)
As with Margaret, James progressed from athlete to technical official. James is described as diligent, hard-working, extremely knowledgeable, experienced, passionate, encouraging and the list goes on and on.  Below are a few of James` remarkable experiences and achievements since 2012.
2012 London Olympic Games
2012 London Paralympics
2013 European Team Championships Gateshead
2014 Commonwealth Games Glasgow
2016 Rio Olympic Games
2016 Rio Olympic games
2017 World Championships London
2017 World Paralympics London
2018 World Cup London
2018 World Indoor Championships Birmingham
2018 Commonwealth Games Gold Coast, Australia
2019 European Indoors Glasgow
2019 World Transplant Games Gateshead
2019 World Championships Doha
2020 World Indoor Tour Technical Manager
Many Diamond Leagues etc.
Plus, many Passport Stamps if they still do them.
In most of the above, James as a L4 field event official was either officiating or involved in the technical team. Luckily to be skilled in `do it yourself`, James is famous for his `gizmos`, helping make the field officials job more professional and easier.
James with all this knowledge and experience is most approachable and is an ideal mentor for all levels. Combined with his field and technical duties, he is a well-qualified endurance official with national experience. This started back in 1995 when he was in the start team at the World Cross Country Championships in Durham. Four years later, he was the course measurer for the marathon at the World Veterans Championships in Gateshead. What many don`t know, is annually, James is the finish team leader, controlling thousands of Great North Runners crossing the line, a mammoth task efficiently carried out.
It is no surprise with the return to track and field competition, James was chosen as COVID-19 Coordinator at local events. With this in mind I had no hesitation in giving him the equivalent job in the first NE cross country event in the NE in a return to competition for young athletes during the pandemic.
​


​Here are many of the North East Officials who were involved in the recent World Para Athletics Championships which took place in London.

Find out more about how you can get involved by visiting the Officials page.

Mark Ellis has provided this fantastic blog of his World Championship Experience.

Many North East Officials were in action at the IAAF World Athletics Championships in London recently. As always, they have done the region proud!
Latest details of Officials Course available here
**NEWS** There will be a course at Gateshead college on Sunday 12th November 2017 and anyone interested should contact Chris Betts via email christopher.betts@btinternet.com.

The course will cover: Timekeeping, photofinish, track judging endurance, and field and starter/marksman
The North East is worryingly short of officials. The future development of competition in the area is under threat unless new officials step forward. Details of how to become an official can be found here: ​http://www.englandathletics.org/Officials